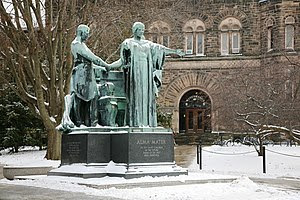 Image via WikipediaOne dismal February morning in 1962, near the beginning of the second semester of my freshman year at University of Illinois, I arrived late for my early morning English class, interrupting proceedings while I climbed over students in the crowded classroom in making my way to my seat.[1]

"Not nearly so much as the destination, Mr. Prahlhans," I replied, as I struggled to remove my wet overcoat.

At the university they offered new students two paths of study in basic academic subjects. I chose what was undoubtedly for me the wrong one, called DGS (for Division of General Studies) English. I adjudged the course to be trivial and the teacher to be loathsome. Always more concerned about expending time doing what I thought was interesting to myself than about superfluous abstractions like grades, I limped by, cut most of the time, and in the end managed to squeak out a D, despite having sufficient command of my native language to meet the university's low standards.

The consequence for anyone getting a D or failing grade in their freshman English class, whether DGS or traditional Rhetoric, was being forced to take a class called Remedial English — a disgraceful subject to have to stand in registration lines to sign up for, and while I accept that I'd earned that humiliation for myself by my own actions, still I grumbled about it, and blamed the inferior course and teacher I'd had the previous year.

To make matters worse, no credit was given for Remedial English, attendance was mandatory (cutting twice for any reason whatsoever meant automatic failure), and no person would be permitted to graduate without having earned at least a C (I think) in that course. A person could repeat it as many times as necessary to accomplish that end. I was in academic debtor's prison.

One relief was that there was no homework. We simply had to be present every session and listen, and we were required to write a series of six increasingly complicated essays in class, which the teacher then critiqued, graded, and returned.

For the very first exercise we had a choice of writing either about some issue of student politics on campus, about which I knew absolutely nothing, or about something having to do with Lyndon Johnson, who was then Vice President, and I cared equally little about him.[2] Being angry about the choices, in addition to having to be there in the first place, knowing that the best I could do was make something up, and so was bound to fail, I submitted an altogether stupid @#$! off-topic rant about having to write this stupid @#$! paper on this stupid @#$! topic about which I knew nothing, and having to take this stupid @#$! class. I didn't include the expletives, but was thinking them.

To my surprise, the teacher graded my paper thoughtfully and intelligently, as if it were just another badly written assignment from a clueless student (which it was). He included some written advice on how I could cope with the rest of the semester's work.

I no longer remember the name of the graduate student instructor, but for his calm handling of my tirade he deserves highest marks, perhaps even a meritorious service medal, when he could have reprimanded me, and might have griped equally from his own side of the divide about having to teach such a class to mostly morons and losers unqualified to do university level work who all needed to go get jobs pumping gas and stop spending their parents' money by being in college.

He never knew that his thoughtful comments probed a Good Attitude button in my head and triggered a permanent change in my life. Shortly thereafter my whole stance became transformed. I began to listen attentively to his carefully prepared and enthusiastically presented lectures, which constituted in toto a formal review of English, from basic grammar through advanced composition, over the course of a semester. As I listened and learned, the quality of my own writing escalated assymptotically.

As a result, despite the no-credit shameful status of Remedial English, I have always looked back on taking this course as a highlight of my undergraduate experience, and in some respects a turning point in my life, because it imposed a need for me to come directly and intelligently to grips with the techniques of writing, today one of my deepest everyday concerns. What I learned then has served me well all my adult lifetime. And it's worth noting, too, that for the rest of my academic career I never got anything but A's on term papers.

[1] Note on the image I used here. By coincidence, the classroom in which this episode took place was located in the building entered through the door under the outstretched arm of the figure in the statue.

[2] I have since learned a great deal about Lyndon Baines Johnson, whose greatest importance came after the period of this story, and find him to be a fascinating character in US history.

Lynn David Newton
Columbus, Ohio, United States
If you think you're smart, remember: you're only as sharp as the tools you use.